What steps is the US higher education taking in response to Russia’s invasion of Ukraine?

As a result of the Russian invasion of Ukraine, the Massachusetts Institute of Technology (MIT) has decided to cut ties with the Russian University it helped to establish, Skolkovo Institute of Science and Technology, or Skoltech. MIT has said it took the decision after consulting with the U.S. Department of State on the effort. 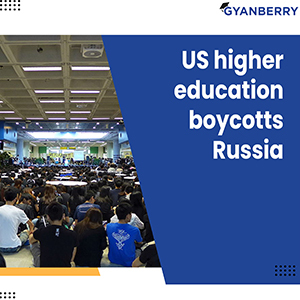 With respect to the impact on international students of Russia and Ukraine, people in the US have been voicing for giving aid and special protection status to Ukrainian students, to ensure they don’t lose their visa status. It is also being demanded to expel Russian students, along with closing down their embassy.

At the same time, some academic experts and Universities have been advising against politicizing the education of students and judging international students by the actions of their home country’s government. But the politicization of the issue has already reached an inevitable position, with University students and faculty members protesting against the invasion of Ukraine in large numbers on University campuses and declaring it as an attack not only on Ukraine but on Democracy throughout the world. The situation is likely to get more complex for universities, especially for those who have both Russians and Ukrainians as students and staff. Russian students may find it difficult to transact and pay fees after Russia was kicked out from the SWIFT system and the Russian Government banned its citizens from doing foreign transactions.