What does the Russia-Ukraine crisis mean for international study abroad programs in Europe?

Just when the world was overcoming the shadow of the covid-19 pandemic and study abroad programs were gaining momentum, it has taken a hit again, this time due to a war in Europe.  The conflict between Russia and Ukraine is now having an economic impact not only on the two countries but the rest of the world. Countries are recalling students already in Russia or Ukraine and hitting pause on upcoming study abroad sessions in those countries. 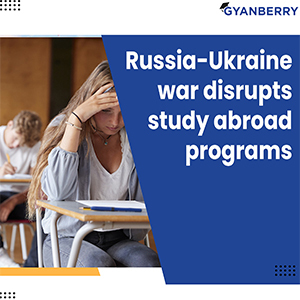 International Students who were studying in Russia and Ukraine have started to leave the country and are being evacuated by their home country’s government. Due to an uncertain future and no possible guess as to when the war will end, students are being advised to complete their programs online or withdraw from the program completely. Although, choosing the latter will not result in reimbursement or refund of the fees paid.

The US has also issued an advisory for all family members and non-essential embassy staff to leave Russia at the earliest. Twelve students were at Middlebury College’s school in Russia when the war broke out last week—three from Middlebury and nine from other U.S. colleges, according to Middlebury College spokesperson Sarah Ray. As of Wednesday night, three students had left; the majority will depart Friday, and the last student will leave Russia over the weekend, Ray said.

The situation is also tricky and ambiguous to those Universities that house both Russian and Ukrainian students and staff. There are approximately 5,000 Russian students attending institutions of higher education in the United States and 1,700 more from Ukraine. They often interact via international offices on campuses and have developed a close bond. Unfortunately, the same is not happening between the politicians and diplomats of both the countries, who have been in a verbal war and justifying their stance on international forums such as the UN.

American politicians and Universities have been requesting to expel Russian students and give special visa status and relief to Ukrainian students. Although they have not imposed a blanket ban on Russian students, it remains a big question as to whether the students will be judged by the political stance of their home country, and what effect it will have on international education, as more European countries are planning to stop study abroad programs due to the uncertainty created by the war.