The UK university staff protest: How big is it?

Thousand of UK university staff are on strike to protest against pension cuts. The University and College Union (UCU) members showed up on the picket lines at the University of Strathclyde in large numbers with DIY banners and chants to showcase their displeasure for university employers. 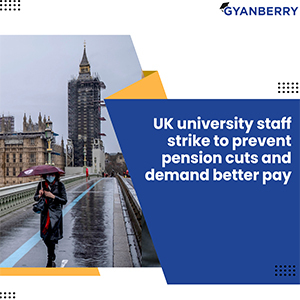 The strike started on February 14 and is the first of 10 days of protests planned over a duration of three weeks.

UCU members claim that they have huge support from students, while university employers assert that only a small percentage of UCU members who have little to no impact on students are among the most active protesters.

According to Jo Grady, the UCU general secretary, the staff is going on strike to prevent a 35% cut to their guaranteed retirement income. Additionally, UCU members are also fighting the insecure fixed-term contracts that employ a large number of teaching staff.

The list of demands doesn’t end there. University staff is also demanding better work conditions, reduced pay gaps, and a £2,500 pay increment for all staff.

At next week’s strike action, 50,000 staff members from 68 UK universities are expected to walk out to seek better work and pay conditions. The ongoing strikes are definitely big and are only going to get bigger.

While these strikes will impact millions of university students, whether or not they will be enough to move the university employers, is a question that only time will answer.