Michael Thaddeus joined Columbia University in 1998 as a Mathematics Professor. Over the last two decades, he watched the university’s ranking gradually climb up from its usual spot around the 9th rank. That is precisely what motivated the professor to cross-check data when he saw the ranking rise to a staggering #2. 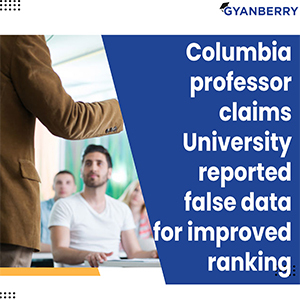 In his 11,000-word faculty page, Michael Thaddeus explained that he purchased the subscription of U.S. News, a portal that regularly updates universities and colleges’ rankings, to obtain a detailed insight into the data. Robert Morse, the person responsible for developing the methodology and surveys for U.S. News rankings, explained that the magazine relies on schools to correctly report their data, which is further verified by academic professionals.

Michael Thaddeus claimed that Columbia University submitted false data in a bid to improve how it is perceived. He strengthens his claims by referencing the online directory of classes, which details course enrollments, and the directory of faculty members that mention their degrees. According to Thaddeus, the university has published false data on class sizes, the extent of expenditure on instructions, and the data on full-time faculties that hold a doctorate or other terminal degrees—the kind of data that services like U.S. News depend on the college to obtain.

Some of the findings by Thaddeus reveal more significant discrepancies, such as the one concerning the classes for undergraduates—Columbia stated that 83% of their undergraduate classes had students fewer than 20. The estimate by Thaddeus paints a different picture of the percentage being 63 to 67%. The result is a difference of thousands of classes. Thaddeus further argued that the categorization of patient care under instructional costs deviated from other colleges’ usual practice, like the New York University. He hints that the college administration may be too interested in portraying an ideal reality while not being interested in improving the way it really is.

However, Columbia University contested the allegations in an email statement. The university reaffirmed that they take their responsibility to report accurate information to federal, state, and private entities seriously. Columbia countered that the directory which Thaddeus referred to is not an official record, and hence, conclusions from such records are prone to be divergent from the official data. The university also pointed out that patient care counts under instruction cost as it is provided by medical school professors who could also be training students.

Upon receiving a copy of Thaddeus’ work, Tim Chartier, a mathematics professor at Davidson College (who also previously attempted to dissect U.S News’ ranking methodology), commented in an email that Thaddeus is aware of his calculations not being foolproof. Still, his findings uncover important questions about the data Columbia University submits to U.S News.

The event between Columbia University and Michael Thaddeus sparked the much-needed discussion on the necessity for abating the reliance on university rankings. According to Thaddeus, the whole idea of university rankings does not let students look up whichever information is of utmost importance to them. He also highlighted that universities have a conflict of interest between providing accurate data and providing data that makes them look favorable to students. Ultimately, Thaddeus continues, private organizations, like U.S News, are at risk of looking unprofessional and unreliable due to publishing false data.