Prague listed among the world’s best student cities in 2022

In a recent study published by The Campus Advisor, Prague was ranked 7 among the list of 30 best student cities in the world. 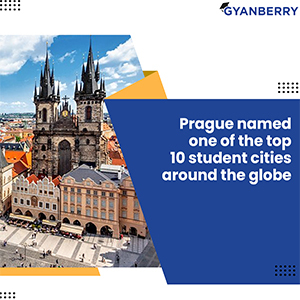 The rankings were compiled on the basis of factors like student friendliness, diversity, affordability, nightlife, public transport, amenities, and opinions of current students.

Student cities were scored out of 5 on the parameters mentioned above, wherein Prague received a total score of 4.40. Student friendliness (4.74), nightlife (4.61), and public transport (4.53) were the highest scored parameters for Prague. However, the city received a 3.9 out of 5 in affordability, which may be surprising for many as Prague is relatively more affordable than other popular study-abroad destinations.

A total of 12,164 students around the world took part in the survey on the basis of which the list of best student cities was compiled.

Some other EU cities that secured top ranks were Vienna (ranked #4) and Berlin (ranked #6). Melbourne, New Castle, and Seoul secured the top 3 positions.