International students’ cry for help- stories of survival from Ukraine

This is January 2022- you are Oluwaseun Adefemi, a Nigerian medical student in his 20s. Your life is pretty much all right, balancing academics and social life. Cut to March 2022, a couple of months later and your life has taken a 180-degree shift. Living in a bunker for days is the ‘new normal’ for you. Air raids and bomb blasts occurring near you is the ‘new normal. “My heart was pounding, I didn’t know what to do, but I knew I had to leave. The main route to the city had been bombed, the train station had been bombed. But we finally heard that there was another route through the forests,” said Oluwaseun Adefemi. 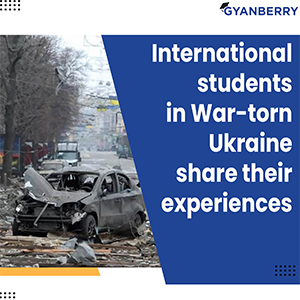 When the matters are about life and death, every decision matters. The situation in the city of Sumy has been apocalyptic for students. As of early March, an odd 1,200 students were trapped in the city of Sumy. So far, students have been depending on the hostel’s and university’s food supply, but water has been shut off in the city for several days, forcing them to melt snow to drink and cook with. Many students have decided to travel to the city of Poltava, which is nearly 180 kilometres to the south of Sumy. Fleeing the city comes at high costs too, firstly there is a fear of running into Russian troops which might have taken control over small towns and country roads. Secondly, transportation within the country has practically stopped. The drivers who are ready to take passengers are charging exorbitant prices. Ukrainian soldiers are doing their best to protect the students by constantly updating them with the ground situation. Ukrainian troops have warned students who have attempted to flee to stay in hostels. The trek takes them dangerously near to the conflict on Sumy’s outskirts. Nonetheless, several students felt they had no option.

In the real-life case of Oluwaseun Adefemi, after two hours of driving, Adefemi along with three friends finally reached a nearby city where things felt calmer. “We wound down the windows. He played music, something Ukrainian. He relaxed, the speed reduced, he looked calm. We were getting close to Poltava.” On their way, they saw young men, barely 20 years of age, holding guns and several other deadly weapons. The driver was nervous, he was going at outrageous speeds. The ground was covered in snow, he was trying to keep the car in control while speeding. Making it through the journey was tough, there were countless ‘network-less’ areas and they also drove through forestry into blind roads. Finally, they reached Budapest after driving through the Hungarian borders. Adefemi said that the journey felt like an “impossible mission” he said, with several points where it felt they could be speeding into military conflict.”

Tatyana Mayboroda, who used to work at Sumy’s State University and is now an international students’ coordinator assisting with the evacuation operation, stated that no movement is feasible without a ceasefire.

“There’s fighting and shelling coming from practically every direction,” she stated. On Thursday, Russian artillery struck the university’s military department, and the city remained dark for over 24 hours as Russian jets struck the region’s thermal power plant. Mayboroda reported that two critical bridges, one in the south connecting to Kharkiv and another to Kyiv, had been demolished and that the railway station junction in Konotop, which connects all trains traveling to and from Sumy, had been damaged and taken by the Russian army. More than 10,000 Indian students have been evacuated from Ukraine over the past week, including from the besieged city of Kharkiv, the Indian embassy in Kyiv said in a statement on Saturday, with 600 of them getting evacuated recently from Sumy. The evacuation mission of these 600 odd students was no less than a feat of excellence. Their families breathed a sigh of relief as they safely went to Poltava, boarded a train to western Ukraine, and returned to India. For two weeks, Indian students in Sumy fought in bomb shelters and basements of their dormitories in harsh weather, running low on food, drinking water, and other necessary supplies while Russian soldiers pounced on the city with rockets and heavy gunfire. Since the Indian Embassy in Ukraine issued its initial advice in January of this year, more than 22,000 Indian nationals had fled Ukraine. Nearly 20,000 Indian nationals who left the country, largely students from Kyiv, Kharkiv, and Sumy, were evacuated under the government’s ‘Operation Ganga,’ which flew people back from a number of border nations in over 90 special aircraft.