The membership of universities and members has been slashed by the European University Association (EUA). The move shocked even the most academically gifted minds of Europe who back the dovish cause, mainly pertaining to the aggressive and pro-war nature of the statement. 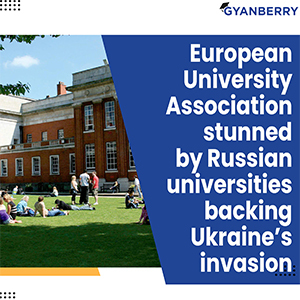 In a press release issued on March 7, EUA states that it condemns aggression against Ukraine. “It advises member universities to ensure on a case-by-case basis that continuation of education and research collaborations with Russian academics remains appropriate at this time, using national and European-level policy guidance to assess this – recognizing that many partnerships are based on peer-to-peer relationships and that many Russian academics have spoken out against this invasion, at great personal risk,”.

The 12 universities would continue to remain suspended until such time as they are once again ‘compliant with European values’, declared the statement posted on EUA’s website. The list of members suspended-  The list of the 12 suspended universities can be found at the end of this article.

What made EUA raise their eyebrows was how the Russian rectors decided to proclaim that it was ‘very important’ to support the country’s army and president, and state that it is their “fundamental duty” to “teach our students to be patriotic and to strive to help their motherland.”

The EUA went to indicate that in its assistance efforts, it will assist Ukrainian institutions, members of the Russian academic community who oppose aggression against Ukraine, and the larger European higher education sector. Last week, the rector of Peter the Great St Petersburg Polytechnic University endorsed the invasion wholeheartedly, blaming the West for provoking the crisis and echoing the Kremlin’s assertion that Ukraine was looking for nuclear weapons.

Simultaneously, the Association will hold National Conferences of Rectors of its members to determine the best approach to work collaboratively to help Ukrainian members, in collaboration with important organizations such as the Endangered Researchers and the Magna Charta Observatory. For the time being, it will likewise suspend communications and collaboration with any central government agency of the Russian Federation or any other nation that actively supports Russia’s occupation of Ukraine, and it encourages its members to do the same.

It is interesting to note that many in Europe believe that proponents of retaining scientific linkages feel that Europe should not penalize and isolate Russian colleges and professors because they may be a pillar for peace and liberalization in Russian society. It is doubtful how willingly the rectors signed up for the statement, making the arguments and dialogue to maintain peace between academic professionals more difficult than ever.

Alexander Nozik, a senior researcher at the Moscow Institute of Physics and Technology, speaking in a personal capacity, said that he estimated around 90% of Russian academics are “firmly against the war” and “terrified of what is happening”, although open polling is impossible because of a fear of prosecution. “This letter by rectors is a shameful act,” he went on to say. But it may have been signed under some kind of duress – it could have been drawn up for them, and the rectors were too afraid to object, he speculated. It can also be conjectured that rectors would’ve been under pressure to sign the statement as it wasn’t actually publicized by them in press.

Also, Russian rectors released a significantly less aggressive statement a couple of days before their incendiary declaration, urging for foreign study to continue regardless of developments. Almost 8,000 Russian scientists have already signed a petition against the invasion of Ukraine. The petition was originally published on a science website, but it has now been removed “due to the new legislation essentially establishing harsh censorship.” The list of signatures, however, is still available.