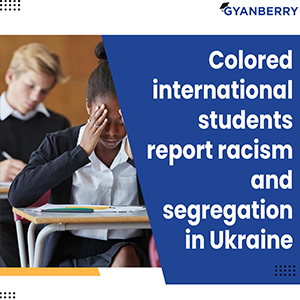 The basis of denying entry- they are black. The students shared their experience of trying to enter Poland in which they were stopped by the security at the border check post. At the same time, they noticed that white people were being allowed to enter Poland. This situation and discrimination put a big question mark on the evacuation efforts being taken by both Ukraine and Poland governments, although their officials have denied such discrimination.

“They stopped us at the border and told us that Blacks were not allowed, although we could see White people going through,” said Moustapha Bagui Sylla, a student from Guinea. He said he fled his university residence in Kharkiv, Ukraine’s second-largest city, as soon as the bombing began. Another student from Nigeria described similar scenes at the border crossing. He said his group, which included women, was shut out of the border post even as White people were let through. All of these people walked through freezing cold to the border check-post, only to be turned back.

The discrimination was not limited to African international students but spread to Indian international students. Afte India abstained from voting in the UN at both general assembly and security council, Indian students were harassed by Ukrainians, for not taking a stance against the war. Numerous Indian students camping at the border have alleged they were abused and beaten up by the Ukrainian forces.

Another Indian student alleged that they were not being allowed to cross by the Ukrainians over to Poland because the Indian government sided with Russia over the issue. Some students have also complained that they were kept in a hostage-like situation in the freezing cold and denied water and food.

Priya, one of the students, said Indian students were stranded on the roads and running out of money and food. “For the last four days, we have been eating only three to four spoons of rice. Now, the Embassy has asked us to board a train at our own risk to move out of the town. No train was available and we are losing hope”. Students are continuously being denied entry into Poland as well, despite the ambassador of Poland stating to India that the country will accept Indian students stranded in Ukraine without any visas.