1 million surplus jobs in the UK drive demand for graduates

The UK labor market is on the lookout for qualified staff and graduates after facing a skills shortage. As per the data published by a Universities UK report, at the end of 2020, there were 15 million people with degrees or equivalent qualifications working in the UK and nearly 16 million managerial and professional positions to be filled. 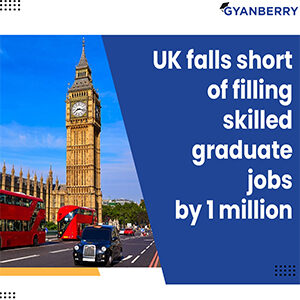 In response to this, Prof Steve West, UUK’s president and the vice-chancellor of UWE-Bristol said that “despite some questioning the value of graduate skills, this report shows that employer demand for UK graduates is significant – it has increased year on year and is likely to grow in the future.”

Most people are in support of funding skills development and improving the quality of higher education offered in the country. The higher education minister for England, Michelle Donelan, affirms this by saying the figures “show just how important higher education and skills are for the UK’s future”.

“We aim to further improve graduate outcomes and continue to drive up quality to deliver the highest-quality education for students from all walks of life,” she said.

The Universities UK report has succeeded in its aim to prove that UK undergraduate degrees are a worthwhile investment and that job vacancies for qualified graduates are on an upsurge. Even during the pandemic, there was an uptick in demand.

Another report by the Organisation for Economic Co-operation and Development states that 14% of UK’s workers are overqualified for their current job roles, which means that they are graduates working in non-graduate occupations. In contrast to this, more than 27% of the workforce is deemed underqualified, including non-graduates filling graduate-level roles.

If we were to crunch the numbers, we would find that the tally of UK workers occupying professional roles rose by 647,200 in 2020, while those in other roles fell drastically by 817,000 during the first year of the Covid-19 pandemic.

The Institute for Student Employers says the number of graduate vacancies currently is 20% higher than before the pandemic in 2019 and is set to increase again this year in comparison to 2021.

The chief executive of the Institute, Stephen Isherwood said, “In both the short and long term the demand for skilled graduates is only going to increase. To ensure that employers can access the talent they require right across the UK economy, it is imperative that we continue to invest in graduate talent.”

To combat this shortage, the government has proposed increasing the cost of undergraduate student loans for students in England. This would automatically give lower and middle-income families access to £30,000 more to repay their student loans.

Government employees are also mulling over the introduction of minimum GCSE grades required to qualify for student loans. However, this idea has faced strong opposition as some think the move would prevent students from disadvantaged family backgrounds from pursuing higher education.